There’s probably no another ritual of the Ancient Egyptian civilization best known and widespread than that of the so-called “Opening of the Mouth” (upet-r). This ritual, with multiple meanings and sometimes seemingly contradictory, is in fact attested in all stages of the long Egyptian history, albeit as subjects in the course of the more than three millennia of pharaonic culture, to various changes and modifications, both in textual and epigraphic documentation as in the archaeological. As already mentioned, in Egypt the ritual of the opening of the mouth was practiced, since its inception, not only on the divine statues and / or gifts, but also on those of the private and particularly on the mummies and the anthropoid sarcophagi (hereinafter then we’ll talk only for convenience mummy) in their authentic nature of statues or rather, to put it Assmann, of “representations”, the person alive or dead.

The Mummy, in fact, like the statue, served as a support to the deceased of his eternal life, which was conceivable, according to the Egyptians, only through the physical medium. At the same time both were designed to maintain the individual’s presence in the world of the living while fully consapevol ness of his absence. What was done during the bodily existence from the body of flesh and bones after death he was acquitted, on the plane much symbolic as practical and sensible, statues and / or mummies of the deceased, who served as individual ego multipliers on the floor spatial and temporal. This is all the more true of the divinity when you consider, for example, the incredible number of cenotaph graves of Osiris or the multiplication of clay figurines of the same or Osiris Sokar that were ritually buried at Karnak and Abydos during religious events popular area. The ritual is presented therefore as a complex set of magic formulas by which animate and give birth (or rather reborn in the case of the mummies) living things, in the broadest sense that at the end you can give, giving them life or breath and allowing the fundamental interchange between different planes of the cosmos. The ceremony was directed primarily to make active a spiritual passage and, consequently conceptual, between two of the main non-material forms of all living beings, including gods and Pharaoh, or rather those ba and akh a passage that could happen only if being lively, reborn (mummy) or newly created (statue), welcomed in himself the spirit or vital spark of divine and universal origin (the so-called ka). This, joining the ba, the soul real being animated, allow the rebirth in the afterlife and the achievement of the state of perfect spirit (akh).

The ritual, both in the private sphere (the tomb of Metjen) as in the kingly (Pyramid Texts) was repeated four times and was directed towards the four cardinal points, just call up the totality of the (four are also canopic jars containing the entrails of the deceased) subjected to the totality of the universe, to which the same individual (the sovereign in the Pyramid Texts, an increasingly larger part of the population from the Middle Kingdom – around 2055 to 1650 BC – onwards) was destined to return according to the conception current eschatological. The above arguments would have us believe, however, that the ritual of the opening of the mouth was a practice essentially limited to the funeral and mortuary, but it is not so, since, as in Mesopotamia, the practice was strongly associated with the consecration and creation of the divine statues and / or gifts, and their location, and consequent worship, inside the temples.

As clearly specified on the Palermo Stone (middle of the Fifth Dynasty – about 2450 BC), one of the oldest textual sources and authoritative in this regard, given its character of official document, the ceremony included the “birth and the opening of the mouth [ the statue] of the god X – meset upet-r (god X) “. This highlights, therefore, as the ritual was applicable not only to a “supporting” body natural and real as the mummy, but also an ex-novo creation (statue or image to put it to the Egyptian – see below) of another entity , whether the deceased himself, a ruler or a god, as in the case of the Palermo Stone just quoted. This connotation of the ritual of the opening of the mouth as not only the funeral takes place, roughly the same period of the Palermo Stone, also in the solar temple of Niuserra (sixth pharaoh of the Fifth Dynasty: 2445-2421 BC) where the quote of the ritual , with the same same formula above view, it is present in the official consecration of the temple inscriptions, found in the valley temple but are referred to the upper temple worship environments in which this ritual was to be explicated.

The opening of the mouth combined in himself cultic rituals and traditions very diverse, coming from at least 6 different fields: rituals for statues, funerary offering rituals, rituals of mummification, burial rituals, ritual slaughter, and more generic rituals cleansing practiced in ordinary temple worship. based on the centrality of use of a particular cult instrument (the dua-ur auction) which will be discussed further, usually used for the worship of the statues in the New Kingdom, and in the absence of further, precise chronological evidence, the opening the mouth must have had their first job and reason for being in the rituals of preparation and dedication of the statues of the gods, both in the conduct of the main religious festivals that the daily temple worship.

Among the furnishings used in the Opening of the Mouth ceremony were certainly the main two: peshes-kaf, a flint knife ritual, the long, thin shape and with a termination to fish tail; netjeruy the laminae, a sort of meteoric iron flat plates with hooked ends, symbolizing human fingers. As evidenced by both archaeological evidence mentioned earlier that the Abusir Papyri, and especially from the Pyramid Texts in the royal sphere, these two ritual instruments, which will (especially the peshes-kaf) many uses in worship rituals of the New Kingdom, being mainly used during the mummification process, they must have originally had a lot of verses meanings, related to ancestral ritual practices associated with the birth of an individual.

The netjeruy sheets would be used to “purify” the mouth of the resurrected dead to enable it to receive and eat the deals set up for him, thus beginning the real eternal life; an act with a strong symbolic value and the obvious practical implications both in everyday human life, in the case of infants, who in divine and funerary cult of the statues and / or the revived deceased, as they say in relation to sovereign in the Pyramid Texts. Equally significant are also some next steps of the texts themselves, where it talks about the offerings that were brought to the pharaoh reborn immediately after performing the opening of the mouth. The type of offers, it clearly shows that it is food “initiation”, ie foods from symbolic meanings is that above practices, which were designed to enable teething and weaning of the deceased born again (and of course the baby and / or statues in altricasi) in order to prepare them for independent life. Only later, in fact, the deceased received the real funerary offer, usually the front thigh of the ox, from which began the ritual of real offer.

The creation of the living being, with the birth and the subsequent “weaning”, was configured, then, as a cathartic and regenerative, universal character, which constantly and eternally repeated, although in specific and partial forms in time and nellospazio, the original act of creation of the world. Through these rituals furnishings (knife peshes-kaf) of great symbolic significance, the living being newly created and / or regenerated to life, as in the case of the deceased, defeated the primordial chaos depicted by Apophis, dividing into two what was originally united (placenta and baby on one side – the deceased and the other primordial case), ie by multiplying the unit and giving form and life all’informe, in proposing this in the microcosm of its existence, the birth of the sun in the play cosmic creation. Later, the deceased / statue through netjeruy foils and / or dua-ur auction, acquired its divine nature, or better attended than the vital spark that had been given to men by the gods and which was symbolized by the material itself in which they were carved the latter two ornaments, the meteoric iron of heaven and therefore supernatural origin. 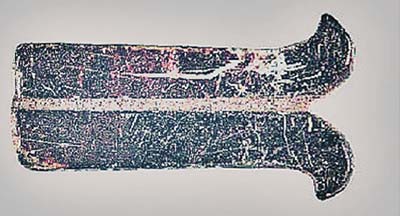 It should be noted, in fact, as, by virtue of the large number of cultic instrumentation findings on the ceremony of the opening of the mouth (peshes-Kafin particular) in primitive tribal communities, then became “chiefdom”, the Naqada period I-III , it is conceivable that the ceremony of the opening of the mouth had been originally the preserve of an elite consisting of the country’s politics. With the gradual unification of the land of the Nile and the sacred nature of the figure of the sovereign, “divine” connotations and must ssere been added to the ritual, probably in order to make clear the different celestial nature of its first recipient. These connotations were most likely taken from the parallel, and most important, ritual statues temple where the divine and supernatural character elements (netjeruy foils and dua-ur auction) came to finish the ceremony of the “creation / birth” of the statue of divinity. To further emphasize this distinction and make it a community recognized and consecrated, the whole was transferred and unified in some rituals directed to the person of the pharaoh, whose intrinsic duality of human and divine, Upper and Lower Egypt, image and form of the gods but mortal body he same, they were concentrating every possible eultraterrene earthly implications of various rituals.

A final aspect of social and cultural character deserves, finally, of being remembered: the presence and centrality in the ritual of the opening of the “son loved the mouth” of the deceased, is mentioned in the oldest textual form of the ceremony, the Pyramid Texts, that in the latest Books of the Dead, and present since in the latest versions of the time late. While his presence seems obvious, considering the fact that in all ancient societies the first-born son was destined to succeed patrilineal inheritance and family power, on the other hand, as pointed out by many, it has immediate and explicit recalls with Osiris paradigm and with the mysteries of his death and resurrection, calls that arrive in many versions of the Books of the dead, also in the private context, clearly acknowledge as Horus the son of the deceased, the protagonist of the central part of the ceremony, a role ritual and myth-poietic once the exclusive prerogative of the sovereign and / or ritualistic priest. Once again, therefore, a royal archetype is made available to a multitude of “ordinary people” whose perpetuation of the ritual becomes in itself guarantee and validation of its continued effectiveness and eternal validity. As mentioned, on the other hand, further testified the multifarious and multidimensional nature of the religious conception of the Egyptian theological speculation, where the syncretism of metaphors and meanings, continuously enriched, reinterpreted and made alive, it did not affect the practice of worship and ritual but it made indeed, more and more alive and effective because it legitimized by the power and prestige of the tradition.
Facebook
Twitter
LinkedIn